An unassuming man writes unassuming songs with such power and poetry that he’s single-handedly dominating the UK music charts with 14 of his songs in the UK top 15.

Ed Sheeran, a Yorkshire lad, grew up in a village not far away and it was his ‘Castle on the Hill’ that first grabbed my attention with his signature style of telling a story of his youth, simple and straight forward but beneath the surface a soulful and profound message.

Quickly other songs on the album grew on me but ‘Castle on the Hill’ stayed with me and when I learned it was only an hour’s drive away a visit was planned. I just hoped it wouldn’t disappoint.

The predicted hour became a long meandering two-hour journey through quaint villages, thatched houses centuries old hugging the roadside. Soon other houses took on bold and vibrant hues, painted in ochre, startling orange, scarlet, dazzling blue. Small hamlets with the extraordinary names such as ‘Nedging with Naughton’ passed quickly whilst pedestrian style hunchback bridges spanned the brooks. Once again we spurned the Satnav and trusted to instinct, good luck and ultimately the good-old fashioned road until finally, we arrived at Framingham (and it only took three circuits of the town to locate a parking space!).

Framingham Castle dates back to the 12th Century and it was built by a local Norman family and was their home for over 400 years. Later it was briefly owned by Mary Tudor as she gathered her supporters to fight for the throne.

The castle is built on the natural highpoint in the village and it stands magnificently on the mound; a landmark visible across the county to the North Sea.

Its imposing facade strikes me as I walk towards the main gate which would have had a drawbridge across the dry moat. Towers reach for the sky and now number twelve out of the original thirteen and on top of some beautiful brick Elizabethan chimneys have been added by later occupants.

These were for both decorative and practical purposes and seeing their corkscrew design it is easy to understand why!

Having read about the wall-walk this was our first destination. It is unusual to find a complete curtain wall in a castle in England – let alone be able to walk around it. 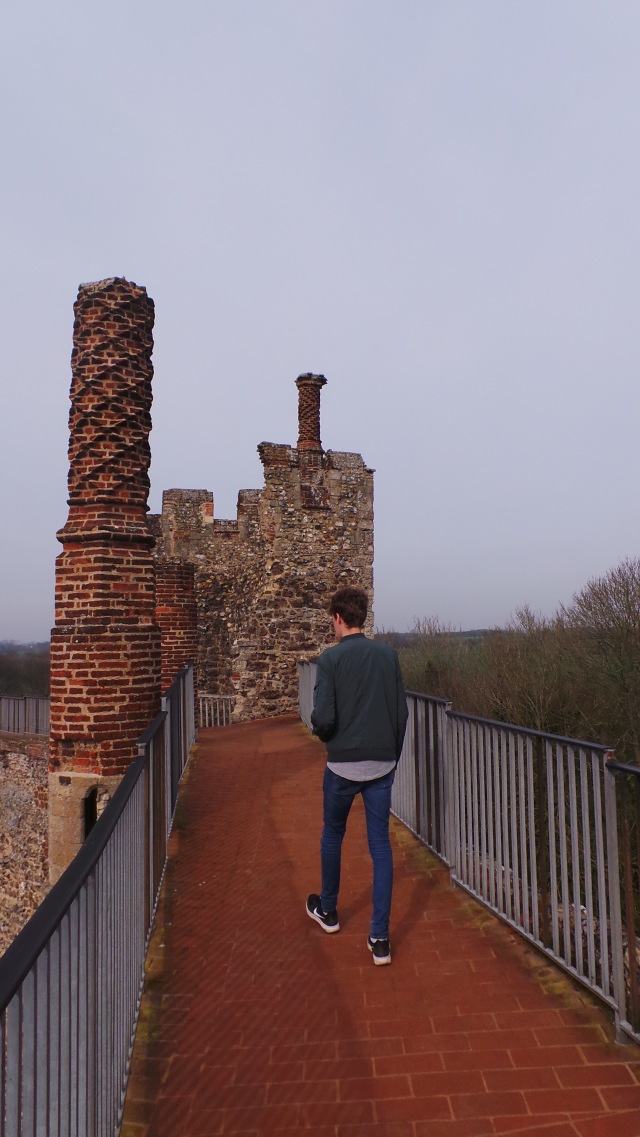 The climb up the 10.5 m (30 feet) high walls was well worth the effort with spectacular views, particularly looking down at the mere below. When originally built the mere was three times larger and the castle would have been reflected in the still water and provide a striking and stately effect.

Walking around the moat, past the mere the sense of peace is palpable, the sense of history all around. Where Normans and Tudors walked, fought, lived, sightseers of the 21st-century swarm. People from the village gather, talk, chat…discuss music, compose songs. It is not hard to feel the inspiration which has become a top hit for Ed Sheeran.

As the album ‘Divide’ popularity grows and yes, I have become one of over 672,000 to have fallen in love with the album and bought it and quickly another song stood out to me. Its quiet, peaceful lyrical beauty is a tribute to his grandmother  – it is wonderfully moving, touching the hearts of all who listen to it. I’m sure ‘Supermarket Flowers’ will have many in tears.

*From ‘Castle on the Hill’

96 thoughts on “‘Perfume of the Mountain Grass’ *”