Like subterranean explorers we travelled for miles along the network of tunnels approaching Oslo. This was quite unlike any city approach I had experienced.

The occasional car swished past on the cavernous carriageway of Bjørvika Tunnel and soon we made our exit from the urban roads. Within minutes we arrived on Bygdøy, a small rural island which boosts an array of tantalising museums. Among them is the Kon-Tiki Museum. Thor Heyerdahl’s book made a huge impression on me as young and one day I must return for this pilgrimage. For now our destination was The Viking Ship Museum which was  easy to find with the aid of the long-suffering SatNav struggling on with the Norwegian pronunciation.

On seeing the Oseberg Ship I initially gasped in awe and immediately felt a humbling stirring in my soul. Over a thousand years old and our fore-fathers had not only created a vast sea-worthy craft but had done so with great sense of beauty and elegance. This was no clumsily constructed vessel, rather the wonder of craftsmanship shone from every angle, the soft planed oak boards with the carved keel, the perfect round-headed iron fastenings, then looking up to the bow I spotted the magnificently carved snake head spiral.

The ship, the largest intact Viking ship in the world, was built around 820 AD and could be either sailed or rowed with 30 oarsmen. Fourteen years later The Oseberg Ship was used as a burial ship for two women, one in her 70s the other in her 50s.

They were placed in a specially made burial chamber which resembled a small log cabin and with them were placed various items to help them in the after-life, including kitchenware, sledges, clothes, as well as horses and dogs. The remains of a peacock was one of the more exotic and unusual animals discovered. There would have been jewellery and weapons but these were looted within a hundred years of burial.

The artistic wonder continued as we wandered further into the museum. To be so aesthetically delighted was totally unexpected. We looked with awe at the beautifully carved sledges, a wagon, animal-head posts as well as the paraphernalia of the every day. The perfectly formed spades would not be amiss in a local B&Q; I could just imagine the price tag dangling on the top.

My wonder at these explorers of the past shifted to admiration of the early 20th Century archeologists whose care and dedication strove to rescue and persevere the finds which had been buried in the blue clay. Seeing the collapsed nature of the buried boats – oh yes, I forgot to mention the shock and amazement of discovering two further complete Viking Ships at the museum; The Gokstad Ship and The Tune Ship, tucked into opposing sides of the large cross-roads shaped museum.

Buried boats and artefacts were discovered tumbled to the side like giant wooden dominoes. All askew. All topsy-turvy. Looking so fragile in the photographs from the era, now the power and force resonated from the ships, silencing the large crowd mingling around us. 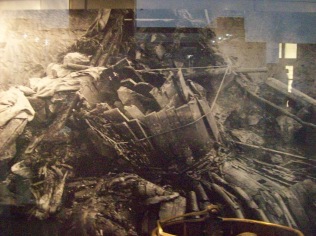 Churns and Artefacts in buried boat

Our experience at the museum was tinged with sadness and poignancy as we learned my son’s generation might be to last to view the artefacts on display. The seemingly perfect objects were preserved with alum and they are slowly corroding from the inside out whilst scientists are working hard to find a solution to the chemical disintegration.

Replete in spirit and mind we left in mutual silence, our musings loud in our own heads, our hearts full of raw emotions from our millennium journey in the previous hours. It was time to leave this island of tranquility and head to our next destination – our hotel in Oslo city centre.