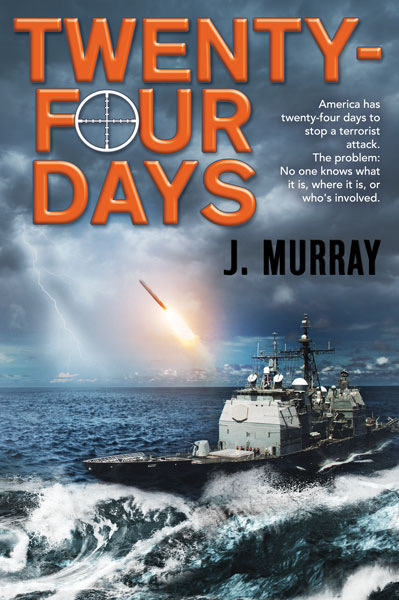 I am delighted to be part of Jacqui Murray’s book launch of her latest exciting thriller, Twenty-Four Days.

It is only nine months since Jacqui Murray released her first book, To Hunt a Sub, which I featured here…Twenty-four Days promises to be an even more intense and thrilling read.

Some familiar characters return in this sequel novel including the ever popular albeit quirky Otto,  a sentient artificial intelligence robot. Along with its handler, Kali Delamagente and brilliant scientist, Zeke Rowe, the unlikely team becomes America’s only chance to stop a terrorist attack that threatens the nation.

First here is some information about the book itself before Jacqui kindly answers some questions that came to my mind whilst reading this and the sample first chapter.

‘World-renowned paleoanthropologist, Dr. Zeke Rowe is surprised when a friend from his SEAL past shows up in his Columbia lab and asks for help: Two submarines have been hijacked and Rowe might be the only man who can find them.

At first he refuses, fearing a return to his former life will end a sputtering romance with fellow scientist and love of his life, Kali Delamagente, but when one of his closest friends is killed by the hijackers, he changes his mind. He asks Delamagente for the use of her one-of-a-kind AI Otto who possesses the unique skill of being able to follow anything with a digital trail.

In a matter of hours, Otto finds one of the subs and it is neutralized.

But the second, Otto can’t locate.

Piece by piece, Rowe uncovers a bizarre nexus between Salah Al-Zahrawi–the world’s most dangerous terrorist and a man Rowe thought he had killed a year ago, a North Korean communications satellite America believes is a nuclear-tipped weapon, an ideologue that cares only about revenge, and the USS Bunker Hill (a Ticonderoga-class guided missile cruiser) tasked with supervising the satellite launch.

And a deadline that expires in twenty-four days.

As America teeters on the brink of destruction, Zeke finally realizes that Al-Zahrawi’s goal isn’t nuclear war, but payback against the country that cost him so much.’

To the interview – Jacqui’s answers are in italic.

Firstly, I am interested in the research you must have undertaken for this book? It is technically, scientifically and militarily detailed. What did your research entail? Do you have a background in the Navy/submarines/AIs? Have you any personal experience of submarines?

I have been onboard a submarine, but (of course) couldn’t visit many of the parts I had to describe because they are classified. For that sort of info, I turned to working submariners. They shared what they could without crossing the security line. I also did a ton of Googling under the assumption that if I could come up with it in a Google search, it probably wasn’t classified. Any time I worried I might step over the line of revealing secret details, I stepped back, either obfuscated or deleted. This was true not only for those few sub scenes, but the many cruiser scenes.

Next, I’m interested in your writing process? What is it like writing a fiction book as opposed to your factual tech books? Did you write it whilst still editing the first one? How long did it take you to write this?

My first effort at fiction (called Born in a Treacherous Time–it will come out next year–it has been a long long process) was inspired as an effort to humanize dry facts. I wanted to present real-world events in a way people would enjoy rather than a textbook which tends toward the pedantic. So, I used fiction’s traits of developing characters, story arc, and crises-resolution. This is typical in historic fiction and creative non-fiction, but I didn’t know that when I started twenty-five years ago. I am a devotee of that approach now.

This book is the sequel to To Hunt a Sub. When I finished that book, I sent out query letters, waited, got nibbles and waited some more. To keep myself busy, I wrote Twenty-four Days. I finished it before the query process for the first book ended. That’s frightening to think about. When I went through the same slow, tedious process (which included acquiring and losing an agent) for Twenty-four Days, I decided I’d prefer to self-publish. The material in Twenty-four Days (a partnership between North Korea and Iran, a North Korean nuclear weapon, and an attack on a US warship by North Korea) is somewhat time-sensitive and spot on for today’s geopolitical events–I didn’t want to miss that opportunity!

Following a discussion with another blogger, do you prefer to write straight on the computer or in longhand first? Do you think it makes a difference?

I have rheumatoid arthritis so I definitely must type. I’m looking to the day when I’ll replace typing with speaking. Anyone out there write their book entirely with vocal commands? I’d love to hear how that goes.

How do you find the editing process? Did you write many drafts first?

I like the editing process. I probably read through the entire book a dozen times, to be sure of flow, pacing, that sort of stuff, but in between, I edit in chunks. I find it very effective to have my editing software (I use Autocrit) identify pieces they have a problem with and then dig into it to fix it. There will be thousands of those–too many passive sentences, repeated words, or any number of other reasons. 99% of the time, after I’ve fixed these and then reread the entire draft, I am much happier with the story.

I was wondering if this book can be read as a stand-alone or best after To Hunt a Sub? Are you planning a sequel to Twenty-four Days? Are you working on any other fiction book?

It is a stand-alone though I’ve peppered in details from the prior book where needed. I am planning the sequel. I want to feature Otto (the sentient AI) more centrally and move away from warships and submarines. I’ll know more in a few months!

I’m also working on a spin-off series that revolves around the ancient female Lucy who appeared several times in To Hunt a Sub. Her story of resilience, strength, and pain is motivating. This will be historic fiction rather than thriller. The first is titled Born in a Treacherous Time and is due June, 2018.

With reference to the title – Is there any particular significance of 24 days?

The story starts with the good guys having only 24 days to save the world. Typical thriller fashion, innit? I count down the days as the reader moves through the book, to build drama and keep the action centered.

What is the hardest part of self-publishing? Are there any elements in indie publishing that were easier than you originally thought?

The hardest part of self-publishing is believing I’m worthy. When an agent knocks on your virtual door and says they want to represent you, that tells you you’re a good writer, You’re worthy of being published. It’s difficult to do it without that cheerleader, to put my work out there because I believe in it (and my husband–he always believed in me).

The easiest part of self-publishing is the second book. Once I built a template for how to do it,  all I had to do was replicate it for the second book. That’s not to say it wasn’t frightening, time-consuming, and stressful. But I did have a model to follow that worked once before. That made a big difference.

Finally, here are a couple of extracts from Twenty-four Days to whet your appetite:

Jacqui, many thanks for your honest and informative answers in this interview. Tempted to read more,  Twenty-four Days is now available to purchase at  Kindle US,  Kindle UK, Kindle Canada,

87 thoughts on “Twenty-four Days – A Thriller by J. Murray”