Thank you for joining me on my posts about my recent trip to Florida. I’ll finish off this short series by sharing some photos and information about our visits to the two closest cities; New Smyrna Beach and St. Augustine.

St. Augustine was one city we couldn’t wait to visit. It lies in North-East Florida and is known as the oldest city in America. Its Spanish roots are evident from the buildings in the town; at times I felt I’d been transported in time and location to 16th Century Spain. It was founded on 8th September (my birthday!) in 1565 by Spanish admiral and Florida’s first governor, Pedro Menéndez de Avilés. He named it San Augustin as the land was first spotted on that Saint’s day eleven days earlier.

I’d read about the trolley buses in St. Augustine before we arrived – such a perfect mode of transport to the main attractions. They were handy to take either as a long tour or as a  hop-on hop-off trip as well as being so colourful, open to the air and having friendly informative drivers. However there was one moot point. No one had warned us about the hard and extremely uncomfortable hard seats! Heck! My mother’s ribs are only just recovering from the plastic moulded atrocities! Luckily I remained unscathed by leaning forward and clinging for dear life to the pole by the open doorway – precariously at times. Also suspension is NOT an added extra and one piece of sage advice I wish we’d been given is not consume food before embarking on the buses. It’s a rough ride and doubly so on the cobblestones! 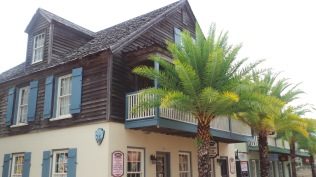 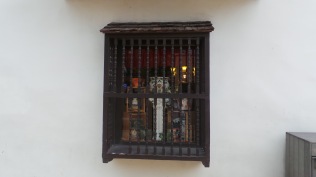 On arrival we first chose to absorb the city’s atmosphere by enjoying a stroll down the pedestrianised St. George Street. We revelled in the beautiful architecture all around us, eyes glancing back and forth and then up to the wooden balustrades of the first floor verandahs adorned with flowers. At any moment I imagined a cowboy shoot-out up above and with a crack, the balustrade breaking and a man falling down below. (You can visualise my misspent youth here!)

We had fun browsing the quaint tourist shops and other endless array of shops, however I was all too conscious of my already burgeoning suitcase and kept purchases to a minimum! Restaurants too were plentiful along the street and they all looked so tempting!

This delightful building, The  School House, is the oldest wood frame building still in existence in St. Augustine today. It was built over 250 years ago whilst Florida was under the rule of Imperial Spain and was constructed of red cedar and cypress and put together with wooden pegs and handmade nails. Classes were held in the front room while the schoolmaster and his family lived upstairs.

Two famous landmarks that symbolise St. Augustine are the San Marcos fortress and the imposing and impressive Bridge of Lions. The original wooden bridge of the nineteenth century was replaced in 1927 and then this was further renovated this century with the lions again reigning supreme.

The Castillo de San Marcos is the only remaining 17th-century military stone fortress still in existence in the US. It was built out of the local coquina stone –  a soft limestone composed of broken shells which took up to three years to dry before being ready to use. During the centuries San Marcos has had four flags flown over it: the original Spanish builders and rulers, then British, for a brief while the Confederate States of America  flag during the Civil War before finally coming under the United States flag.

The recent history of St. Augustine seems to be centred around the colourful character of Henry Flagler.  As the trolley tour wound its way through the idyllic streets his power and money is evident all around from the buildings he helped finance. 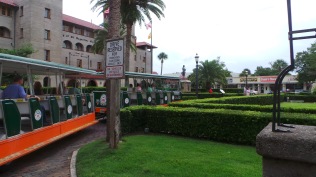 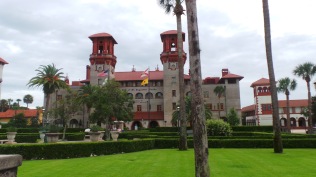 His former Alcazar Hotel is now the Lightner Museum, which considers itself Florida’s Smithsonian and houses artefacts from the natural world, to Tiffany glass and a Victorian village. 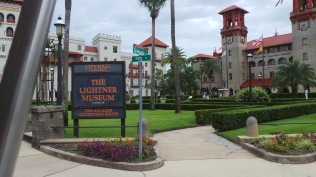 After hours of sightseeing we sought refuge from the busy bustle of town and happily discovered the serenity of St. Photios Greek Shrine. The shrine and the museum are dedicated to the first Greek colony in the US.

With all this sightseeing another break was required and our thirst was quenched by the delicious cooling, fruity taste of a Sangria. What could be more perfect? Our only regret was that we had too little time in this wonderful city to do it justice – we so wished we could have stayed longer!

On our first visit to New Smyrna Beach (it soon became our regular haunt!) I felt I’d stepped into a movie set. The main street seemed to consist of front facades of shops and restaurants! The heat was unbelievable, stifling; the sunlight diffused in the warmth; the air echoed with the sounds of cicadas, otherwise silence. Silence as there was no one around! A few 4x4s parked along the road, an odd car driving past, otherwise the main street – Flagler Avenue (see how he got everywhere!) was quiet. We tried a shop; empty apart from the friendly sales assistant. We passed a couple of restaurants, with only a couple of diners. I tried but failed to turn off the theme music from ‘The Good, The Bad and The Ugly’ playing in my head. 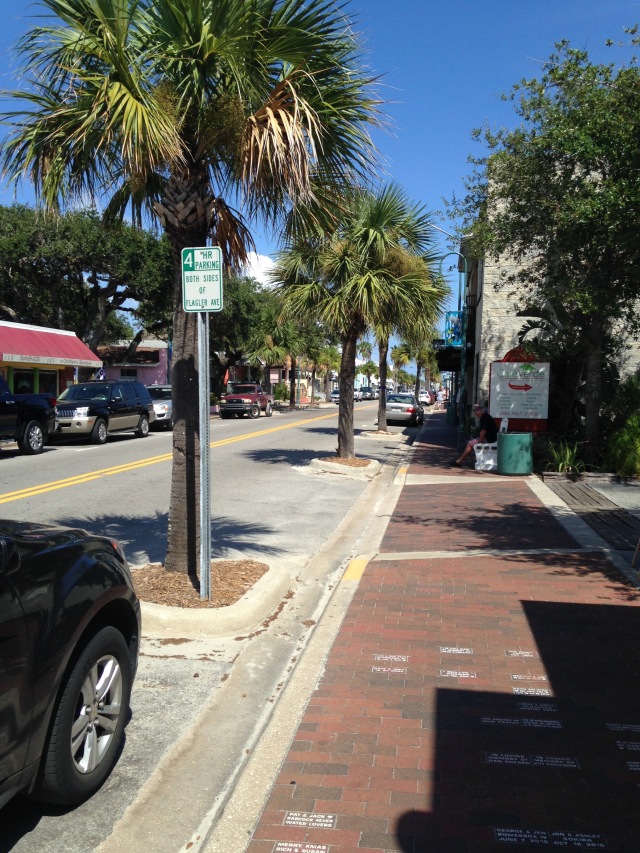 The more I got my brain round this wonderful town the more I came to enjoy it. The art shops were a delight, particularly the aptly named Ta’Da’ shop which had many unique finds within. Only later did I learn that New Smyrna Beach is recognised as on of the Top 100 Art Towns in US, selling locally produced art, imported wares from Colombia amongst other countries, framed paintings and pictures. Of course, there was the odd tourist shop as well…always a must for us…hmmm…tourists!

There were restaurants galore and the quiet of the daytime was replaced by a lively night scene.  We visited one particular restaurant three times – after all how could we resist Norwoods Tree House restaurant.  What a fantastical concept with superb food, great service and live music.

Mexican is not a type of restaurant found often in the UK so it was a joy to visit one in New Smyrna Beach and after having some friendly help deciphering the menu we ordered and soon tucked into a delicious meal.

Not to be out done the Italians were represented en masse too and one place we visited had the most unusual textured ceiling covered with corks!

Each step outside on the pavements along the avenue brought a moment of reflection as we gazed down at the names inscribed upon the red brick path. Instead of those of famous celebrities that I’ve seen elsewhere I was touched to see a local sway to these dedicated memorials and celebrations.

At last I complete my trio of posts about my Florida break and I hope you’ve enjoyed them. May they have brought you some of those wonderful  restorative, exciting and blissful feelings that engulfed me. There is one fact that I’m glad I was unaware of though: that this area has the dubious distinction of being knows as the world’s shark bite capital!