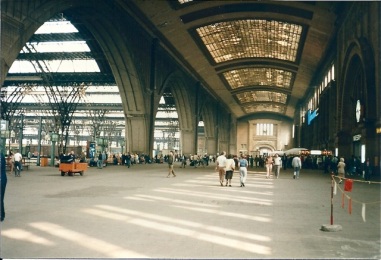 Picking up on the topic of the GDR following Monday’s blog, I’m happy to to post a piece I wrote about my three months in Leipzig as a student.

This was a scene out of a film.

Feeling lost and lonely I stared ever more desolately at the baggage conveyor belt. Most of the other passengers’ bags had long since been picked, just one rather large black suitcase lumped its way round. However I was not alone, being surrounded by twelve  other students from my German department. Most of them increasingly frustrated and angry as I refused to accept the inevitable. My suitcase – my lifeline for the next three months – did not make it to Berlin! Furthermore I would be going to a place where there would barely be anything to buy as replacement, as we soon had to cross Berlin for the train to Leipzig, then in East Germany. My friend led, no, dragged, me to report the missing bag. Many forms later detailing descriptions, address of where we were staying – ie. no idea as yet and only had contact name via Karl-Marx University in Leipzig, we were ready to leave. At least my German was getting a lot of early practice!

Hardly able to contain my tears I left the arrivals hall clutching a paper with Leipzig airport’s telephone number to where my suitcase would be forwarded. This delay turned out to be a lucky for me as the next two hours my fellow students completed the equivalent of the Berlin weightlifting championship en route to the Zoogarten train station in central West Berlin.

Up and down the underground, carrying bags up long flights of stairs, then down again. Lifting them onto tube trains. Groans, moans all around and definitely a few pulled shoulders. The Leipzig student who met us and took us into the town had obviously had not been to Berlin before as we later discovered. Returning home three months later we simply got off the train at Zoogarten station and onto the airport bus outside the station. Easy.

Aching, fed-up we were finally about to enter our first Communist country. We were noisily excited, as only those confident of freedom can be. We queued in long thin barricaded maze rows and at the passport control there were at least two East German officers in each booth plus the guards, as well as the mirror behind you. Now a small sense of intimidation set in , but only so briefly. We were in East Berlin! In East Germany! The wall had been breached a few months earlier but it was still very much a separate state, in a state of limbo, except for the increased freedom to travel, many restrictions and limitations still applied.

It was a while before our train so we took turns to guard the bags as we popped outside to explore Alexanderplatz. We tried hard not to be disappointed but the word grim sprung to mind. Grim and bitter. A huge grey square with stark grey buildings set back and lit up by dirty yellow light. Very bleak, very cold-war era. 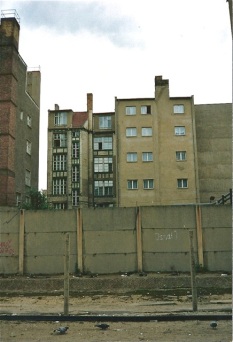 By now we were getting hungry and having finished our meagre supplies we were shown the way to a ‘restaurant’. I use the word loosely. No seating area, standing tables only. I ordered the least offensive sounding dish – soup and bread. Green mush arrived with big fatty sausage dumped on top. The bread was stale, the mush barely edible. The sausage bears no mention. This was as good as the food got whilst eating out, except at the few West German stall traders who came across the border and served delicious pizza slices with chips. We soon learnt to stock up on food when travelling and often went to West Berlin to buy ‘luxury’ items. 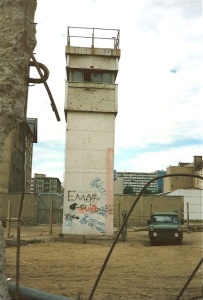 The train rattled in and with more heaving all the bags were carried on board, stowed away and we flopped thankfully into the seats. Old-fashioned, friendly train, seats facing each other. By now so tired we barely exchanged words as we stared out in to the darkness. We showed our tickets to man in long black leather coat – was this really a ticket inspector? Was paranoia already settling in? We saw many of these men on our travels and they were an excellent deterrent to fare-dodging.

Just before our arrival  in Leipzig we went through an area called Bitterfeld. It was a scene of utter devastation. All the trees were dead and only a metre of trunk remained visible. It was completely lacking in vegetation, animal life or light. No houses. Just miles of desolation. Later we found out that Bitterfeld had been labelled the most polluted area in Europe – what an honour! Industry had killed off all plant and animal life and the average life-expectancy was far lower for the workers in the factories nearby. On future trips as we travelled through we tried to hold our breath and avoid contamination. Silly, I know!

At last at our destination – Leipzig! The station was grand with up to sixteen platforms, a most beautiful lofty glass vaulted ceiling stretching the length of the station. It was as if we had been transported to the 1950s with long large trains pulling out to exotic-named places, Prague, Budapest, Warsaw but a few. Dutifully awed we met the man who was to be our mentor  – Herr M.

It is not often I take an utter dislike and distrust of someone on first meeting, but Herr M. was an exception. Looking around I could see I was not the only one so affected, eleven of us felt the same and the impression on subsequent meetings only reinforced this opinion. One student was innately innocent and couldn’t see bad in anyone or anything and she spent the next few months in contented delusion. The only time her sense of justice was riled occurred during a visit to the local zoo which she fled  in tears, crying over its barbaric treatment of the animals.

Before departing the UK our Head of Department had hinted, albeit never stated directly, that there were rumours, very possibly true, that Herr M. had worked/was working for the Stasi. We were told to watch what we said. (A while after reunification it turned out Herr M. was arrested as a spy, but I never did find out what happened after that. )

At last we were nearing the end of our journey,. More dragging, carrying of bags to a block of flats, conveniently located near the station. A creaky lift carried us up to the fourth floor and a room. We crammed into the room which had two bunk beds, a wardrobe, two desks and a shower room. My despair returned as I faced a night without any clothes, toiletries. Nothing. Quickly everyone was allocated into different rooms. My name by the end had not been mentioned. Herr M. looked triumphantly at me and said I was staying in this room, so far by myself! My friends rallied round me with spare toothbrush, knickers, socks, nightie, top and I quickly made note of their room numbers as they disappeared.

The place was covered in black dirt. The beds, unmade, exposed a mattress in three parts. It was so hot I opened the window, only to close them again against the cacophony of rattling crashing trams. Of course with time the noise became a source of comfort to me and I would wake up when they stopped for the hour between two and three in the morning. But that night I covered my ears with the minuscule pillow, then stuffed my ears with cotton wool, then sang to myself. All to no avail.  Nothing, absolutely nothing could obliterate the noise.

They say things always look brighter in the morning. Try coming to Leipzig. Borrowed clothes, no food or drink, no sleep, no contact with the outer world. One of my first priorities was to discover where the phones were. The main telephone exchange was located at the station where we learned to bring our books and work as often we waited one to two hours for a phone to be made available. You had to book the phone, wait to be called into the booth and afterwards pay for the call. Patience was learnt early on. Not then the world of mobiles and tablets.

10 thoughts on “LEIPZIG REMEMBERED – PART ONE”