This is the continuation of Thursday’s post, writing about the first days upon our arrival in Leipzig, in the former East Germany, with my suitcase stranded in England and waking up in a very foreign country.

That first morning my three friends and I gathered in my room to draw up a plan of action. First some breakfast, then we had an orientation meeting at the university with our mentor. Bread rolls and water was our breakfast and then we looked at the map.

The communist GDR did not believe in maps per se. This was more a map a seven-year-old would produce, with pretty pictures for where buildings etc were located, hardly accurate. Only a couple of street names were provided and furthermore no sense of scale as we soon discovered since most of the buildings were drawn in the wrong place and large boulevards were left out.We made our way to the north of the city, getting hopelessly lost but we had out goal in sight. A large tower building some Finnish students had told us to look out for.

After many mistakes we finally made it to the front doors and were told which floor we needed for Herr M.’s office. Let us say floor 12. Four lifts, two on either side of the foyer beckoned us. We carefully read the instructions and found the elevator for floor 12. Confidently we stepped in and pressed the button.

The lifts of the Karl-Marx University have single-handedly resulted in my terror of elevators. Floor 12 rushed past. We panicked, first  stabbing at the button, then at any button and at last the lift stopped on floor 19. Just one from the top. The doors opened. Absolute silence. Brown carpet and walls. Doors closed again and off we went again. We fell down. We were sure the cable had broken as our feet started to lift from the floor. At 2 we jarred to a halt. One of my friends dashed out as the door opened and said she would try the another  lift.

We persevered and soon were quite expert at riding up and down at terrifying speeds. At last the closest we got to stop was floor 14 and we got out and found the steps to walk down. Never in three months did we actually manage to get the lift to stop on 12. By now the whole building seemed to be leaning slightly – or was that just a reaction to the ‘roller coaster’ ride?

Herr M.’s office was not unpleasant and after receiving all sorts of useless information I asked for help with tracking down my suitcase. He seemed to find it mildly funny and lent me a phone – not until later did I realise how exulted I was to borrow a normal working phone. No news of the bag, call tomorrow. I felt sick to the pit of my stomach. We left, walked down a few floors before finding a lift to carry us the rest of the way.

On our own in Leipzig. Shall we call that first day – survival?  Once again we were hungry and as we had just been told about the university canteen nearby off we went – at least it was easy enough to find. When would we learn! Food was piled on our plate, regardless if we wanted it. All inedible. Hunger we learnt was to become a permanent state of affair, only truly staved off in West Berlin where we ate sumptuously. With no lunch we headed to the supermarket. This was to become a daily battleground. Daily as no bread or milk would keep for more than one night.

There were two supermarkets to choose from, equally chaotic. At least there wasn’t all those annoying queues around fruit and vegetables – there were hardly any to have. We picked some potatoes and spent another thirty minutes finding out how to pay for them. First to a lady  had to weigh them. On the opposite side of the shop another lady then had to price them up. Finally we had to pay for them at the cashier. Morrisons seemed like  heaven once home again.

Of course, there was full employment here. We quickly learnt to look at people around us and learn from them.  Milk came in small plastic bags. Most drinks were pop with bottles tops so after food shop we sett off in search of  bottle openers. We found a department store – mostly empty but with one ginormous basket of bottle openers. Brilliant. We were all set.

After one more night of borrowed clothes I woke up with severe backache. Well, not really but a rumour was going round from the Finnish students (our survival expert helpers) that if you complained about backache to housekeeping you would be given one complete mattress.

Three of us took our bits of mattresses down and bravely knocked on the door of the housekeeper. Very scary, as the ‘witch’ herself opened it. She was probably a very pleasant serene lady with sparkling personality. To us she barked out questions in guttural German. We guessed her queries, replied meeker by the minute, all ready to flee with our old mattresses never to return.

Surprise, surprise, no argument. We were told new mattresses would be delivered to our room and old ones were taken away. We glowed with triumph and had a celebratory drink sitting on bed-slats. For two nights I had been in the room alone. A most unusual situation as many students were five or seven to two bedrooms and one bathroom. I awaited my roommate with trepidation, having been informed that I was the only English student to actually be sharing with an East German.

The next morning as I was getting dressed E. turned up. She had arrived late in the term as she had been at her parents house in the country. She seemed very friendly, my own age, just chatty enough.

Suddenly, mid-conversation her face clouded over. What had I done? Had I said  something insulting without even realising it?

‘Do you believe what you read about me in the paper?’ she asked.

‘What?!’ I replied, totally flummoxed. She then explained that her former roommate from England had written an article for ‘The Independent’ about E.

My first reaction was to be impressed that someone so young had  an article published in the paper. My second thought was  that ‘The Independent’  was  usually a reliable paper. I answered that I had not seen the article and did she have a copy. The article accused E. of working for the Stasi, of spying on the English student, going through her possessions, writings, being very unpleasant and rude throughout. I gave a noncommittal answer and for the next hour or so silence.

Then normal conversation resumed and a sense of détente achieved. I do not know if the article had any truth in it. I do know that  E. was friendly to me when she was there, which was not often. Once she very kindly invited me to her parents house where I spent a weekend of pure bliss. Fresh food, good chocolate and a big bathroom with a bath.

I am sure they still remember this strange visitor who locked herself in the bathroom for over an hour. Washing my hair squeaky clean. No black incipient grime anywhere. Lovely bubbles, beautiful fragrances. Countryside, animals, walks in unpolluted air. No trabbies. As I said, pure bliss and for that I was very grateful to E.

Day three arrived and by now I was resigned to never seeing my suitcase again. I decided one final call was in order before I tried to find some clothes to buy. For quick phone access I resorted to Herr M.’s office, visiting under some other pretext and finally asking for his help. I was astounded to learn that my suitcase was safely in Leipzig airport and that I must now only turn up to collect it! 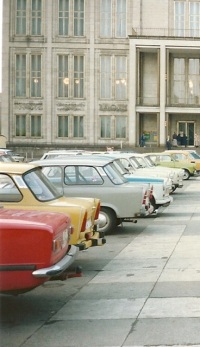 The airport was not far from town, but it might as well have been half a day away as this was how long it took to retrieve it. With no direct links to the airport I needed to hire a taxi. For this risky operation I enrolled the help of my friend and we approached a trabbie cab.

The trabbies were just as tiny inside as they looked from the outside. We squashed in the back and arrived safely at the small airport. The suitcase was waiting for me and I was filled with such joy it was ridiculous. Only a bag after all but I was now ready to face whatever East Germany had to offer. The one bag filled the boot and we saw the car sink. Would it manage with us in the back as well?

We clambered in via the driver’s seat and snuggled together yet again. Our joy was short-lived as on the motorway the driver suddenly stopped and got out. We had heard bad things about the taxis here, hence my initial concern.

We had supposedly ran out of petrol and it was indicated that some Deutsch Mark would help. We said we had nothing else beside the original fare and stuck to our ground. Time passed. Our driver left to talk to others. Should we stay trapped in the car or get out? If we got out might he abandon us and  drive away with my bag? I felt ever more attached to my bag and didn’t want to let it out of my sight again.

We stayed and after half an hour a police car stopped by our driver. Loud angry words were exchanged and meekly our driver returned and drove us back to town. Hurrah! At last I had arrived.