Below is my Open Letter to Amazon, which I am also sending to them in the post.

It beggars belief how little twelve years of my loyalty and patronage seems to mean to you.

From the first year of useable internet I was a keen shopper at your virtual store. As an avid reader the concept of books online proved irresistible. It was a joy to browse at my leisure, reading the beginnings of books, ordering. Very soon the sound of a book parcel landing on my hall carpet became a regular occurrence.

Quickly I adapted my shopping behaviour and as Amazon increasingly stocked various items, I was a frequent visitor — to the detriment of my purse! Christmases and birthdays saw orders for CDs, DVDs, console games. Household items too soon made it into my basket.

A few years later I heard about the new strange phenomenon called ebook! There was no way I could read on such a device, leaving my beloved paperback. I would never be converted. I held fast to this for a while, even when an eye disease made reading smaller print difficult. A relative sang the praises of Kindle – I would not relent. Until I was given a Kindle and a whole new world opened up for me; my love of reading rekindled and my library of virtual books grew exponentially.

All the years you wrote emails requesting reviews. Often only a day or two after the order. Sometimes before said item had even arrived. Only this morning I received just such a notification. 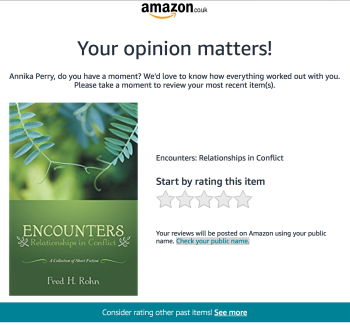 Intermittently I started to write them, then with increasing frequency. I hoped others would find them helpful. Sometimes I sang the praises of films or games, other times I recommended a seller for their prompt delivery. With books I described their impact on me, how successful and entertaining I found them.

All worked seamlessly until 7th June 2018.

The first inkling I had of any problem was as I came to leave a review for a book I had bought. I put the stars in. Then went to enter my review in the box when I was met with the following message.

What?! My first reaction was that it must be a glitch on my computer. I tried again. With the same result. I tried another product. Same outcome. I was unable to leave any review. I just couldn’t believe it!

I immediately contacted you via message and was promised a reply within 24 – 48 hrs. I decided to wait.

The next day, after reading online about this problem, another concern started gnawing at me.

What about the reviews I had posted. Recently? Years ago? Did I dare look? I almost wish I hadn’t checked.

I felt absolute and overwhelming shock. My heart pounded. I was stunned by what I saw. Nothing! All my reviews from the past twelve years eradicated.

All gone — without any warning, communication, discussion, explanation.

I felt devastated, dumbfounded. This felt like such a betrayal of trust, a reckless and total disregard for the individual, in this case myself. All my genuine efforts to review bonafide purchases and gifts had entirely disappeared.

Then came the impenetrable wall of your company … the blankness of silence.

Despite my three further attempts to contact you via message followed by three telephone calls I have still not had any explanation or discussion upon my lost reviews and my inability to post new ones.

The staff handling the calls were pleasant enough even having me in ironic laughter once. My last attempt to talk to someone, resulted in the bizarre declaration from the advisor that I hadn’t ever written any reviews! In disbelief I guffawed and repeated my original issue, already described at the start of the conversation.

All along I was promised I would be contacted soon and once I was even promised a reply in six hours.

During my last telephone call I was repeatedly assured that the matter was being passed over to the Community Team who would be contacting me in, the now familiar, 24 – 48 hrs.

With fading hope and lack of expectation of a reply I am still waiting. The sinking feeling of helplessness with regard to this issue is settling within me. The inability to even talk to someone with authority to discuss the problem is staggering.

In the midst of the emotional fallout, I have become upset with my own distress. In the grand scheme of things, I suppose this is not of such importance, yet it is to me.

All these years I have naively assumed that my longstanding business with your company was a matter of cooperation. I placed my trust in this and feel your total disregard and lack of communication deeply.

My initial shock is now diminishing and replaced by a sad acceptance. I feel for the sellers of the items I’ve bought, for their lost reviews. I despair that I cannot write my thoughts on any possible products I may buy in the future.

Finally, I am still human and trusting enough that a small part of me holds out that my plea for contact from yourselves is not entirely futile, that someone will get in touch with me. To discuss this issue, to find a resolution and hopefully resurrect my reviews and allow me to review in the future.

The heart and soul is vanishing in so much of the world these days — don’t let this happen in your organisation.

I just went in again to check on my reviews on Amazon this afternoon (26th June) and to my utter astonishment I found my reviews are back on! Wow! The power of publicity and the influence of many voices sometimes succeeds … and so happy this is the case for me! Thank you everyone!