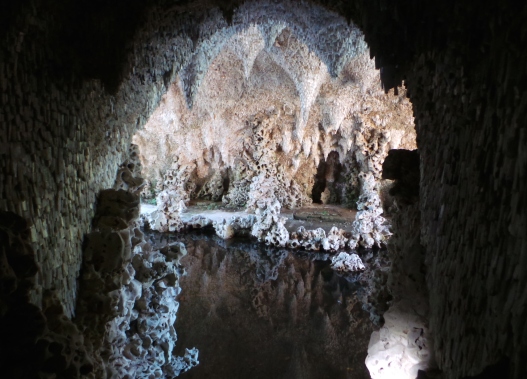 “Two contrary emotions arose in me, fear and desire – fear of the threatening grotto, desire to see whether there are marvellous things in it.”    Leonardo Da Vinci

The same contradiction of feelings rose in me as I studied the noticeboard outside the grotto at Painshill Park, Surrey. Here, outside the bright sunlight sparkled across the lake and immaculately white swans swam in a disjointed line. Inside beckoned darkness and the unknown.

‘We are going to the park for a picnic,’ my friends had said. In my mind I pictured swings and slides interspersed with the occasional thwack of a football.

I never imagined this wondrous landscaped garden created over two hundred and fifty years previously. The perfect landscape of green grass, trees, vineyard and a lake with a variety of bridges. The park teemed with formidable follies such as a Turkish Tent perched on a hill, a Gothic Temple tucked away in the trees  and nestling away by the water’s edge the frontage of an abbey ruin.

For the creator of Painshill Park, Hon. Charles Hamilton (1704- 1786), the folly par excellence was this grotto, the largest and rarest of its kind in the country. Hamilton owned Painshill and as a landscape gardener with experience to rival Capability Brown, he designed the garden, including the grotto, which alone cost over £ 8,000 (now £600,000). He then commissioned the premier grotto maker of the era, Joseph Lane to carry the project to completion.

I had heard murmurings from my friends about the grotto as we walked. ‘Recently restored grotto.’ ‘Took over 15 years to repair.’ ‘The whole roof had caved in.’ I paid scant attention to their words, allowing the briefest image of dark dank caves dripping with water to flash before my eyes before quickly banishing the images.

‘Can we go in?’ exclaimed my son as he rushed back from his ventures around the park. ‘It’s just around the corner,’ he added, knowing us too well.  Us lazy adults had enjoyed the unseasonal warmth and sunshine to rest on the blankets after a hearty lunch (thank you Waitrose!).

We ducked into the darkness and slowly our eyes adjusted to the dim light coming in slithers of beams from small openings in the corridor. In front of me unfolded the shimmering crystal display. If ever there was a ‘wow’ moment, this was it. In awe our small group were silenced and as one we twirled  around, appreciating the grotto entrance.

This was just a taster of what was to come, as we ambled carefully through the 60 ft long corridor to the main chamber. I stopped and gasped. My heart leapt with joy at the extraordinary vision surrounding me. A cavern of stalactites glittered from the roof of the cavern, water flowed gently to a pool and water dripped gently down the walls. Light filled the chamber, with beams of sunlight coming through the wall openings as well as light reflected from the serpentine lake. The largest opening was built to allow the light from the setting sun to shine into the chamber. The magical aura was all pervasive.

The stalactites are giant inverted wooden cones placed onto the main wooden superstructure which is the main chamber. The interior was covered in lime plaster, a task that alone took four months.

Hundreds of thousands of crystals were subsequently glued onto the coned stalactites and surrounding walls. The crystals were made from calcite, gypsum, quartz and fluorite and the restorers were lucky enough to be able to use some of the original crystals. Most had to be hand-cut however, this task taking over 9,000 man hours as well as eight months to glue into place.

The vision for the completed restored grotto relied heavily on a 1776  painting of the grotto by Swedish artist and garden designer (Frederik Magnus Piper) to the King Gustav III of Sweden.  Alas google searches of the painting fell foul of European Data Protection laws.

The grotto is a peaceful haven with the sound of the rippling water an aural delight allowing meditative thoughts to flow. ‘The acoustics were amazing,’ my friends said, as if reading my thoughts. They had attended a violin concert in the grotto chamber last Christmas and couldn’t believe the magical quality of sound.

Visually alluring was the pool of water into which the water flowed. If relatively calm it became ‘nature’s mirror’ and staring into its shallow depths I was overwhelmed with a deep sense of infinity.

In silent harmony we headed one by one to the dazzling blinding light outside, the peace and quiet remaining within us for a long time after our visit.

Thank you to my friends, I thoroughly enjoyed our day ‘in the park’!