Recently I had the opportunity to join NetGalley, an online book reviewing organisation.  Publishers send in their books months prior to release and ‘professional readers’ are then asked to review the book. The feedback and recommendations are considered highly valuable to the publishers and future readers alike.

I will be reviewing one new book here on my blog on a monthly basis – do look out for them and hope you enjoy the reviews.

The Midwife’s Revolt  by  Jodi Daynard 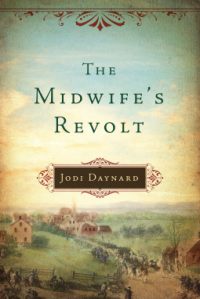 Within the first few sentences, this book immediately and powerfully transported me to the life of women left behind home during the American Revolution.

The story follows newly-wed Lizzie Bolyston as she sets up home on a farm on the outskirts of a new town South of Boston.

Related in Lizzie’s voice the reader quickly enters the head and heart of this strong young lady as she faces increasingly tougher struggles.

Firstly grief blindsides her but with help of friends she slowly overcomes both this and then the prejudice to what is regarded as her ‘witch’ like skills of healing and midwifery. She is exceptional in both and gradually, the ‘medical arts’ taught to her by her mother, help provide a living for Lizzie whilst saving dozens of lives.

As the war deepens Lizzie finds herself embroiled in political intrigue centred around her close friend Abigail Adams, the wife of the future Second President of America. For a while Lizzie even finds herself attempting to disguise herself as a man during her espionage escapades. After all, the book starts with the sentence: ‘My father once told me I had the mind of a man.’

However this is not a traditional thriller as parallel to the assassinations and treachery runs various strands of the romantic nature.

Lizzie finds herself courted by a man, Mr Cleverly- but can she trust him? Equally she is attracted to another, Thomas Miller – yet again she is faced with the same dilemma of those unstable times – is he trustworthy?

The actions of her servant and close friend Martha also raises further doubts as to faithfulness and friendship. This suspicion causes great heart-ache for both women. Life for them all is never simple nor straight forward and nothing is quite what it seems.

I must make a quick mention to another powerful being in the book, whose existence is still etched on my brain – the wonderful and faithful horse, ‘Star’, her husband’s beloved animal. Life is never fair, Star!

Jodi Daynard’s writing is fluid throughout and its authentic contemporary feel never wavers. At times I have to remind myself this was actually a work of fiction and not a factual story.

The harsh and bleak life is brilliantly rendered, so raw I suffered with the women through their troubles and the winters of hunger. How I celebrated with them as they ate their far too rare servings of warm apple pie!

Their struggles with the farm are graphically related and whilst celebrating feminism and its strength, I rejoiced when they received the occasional help from a man with some of the hard graft.

The book climaxes with a dramatic battle on their very doorstep where the battles of the heart are reconciled and the future of America is more secured.

Although I approached this book with trepidation – the time period alone of the American Revolution  filled me with fear – I can honestly say there is never a boring moment in the book.

It has a  strong pace throughout, the characters, whether good or evil,  are vividly portrayed and the true grit and courage of the women shine through.

This is truly a gem of a book. Do read it now and escape into the past!

I just found out that I am now on the short list on the Ink Tears Short Story Competition 2014.

Yes, I am thrilled to have reached this far.

Winners will be announced end of this month.

9 thoughts on “A Midwife’s Revolt: A Book Review”