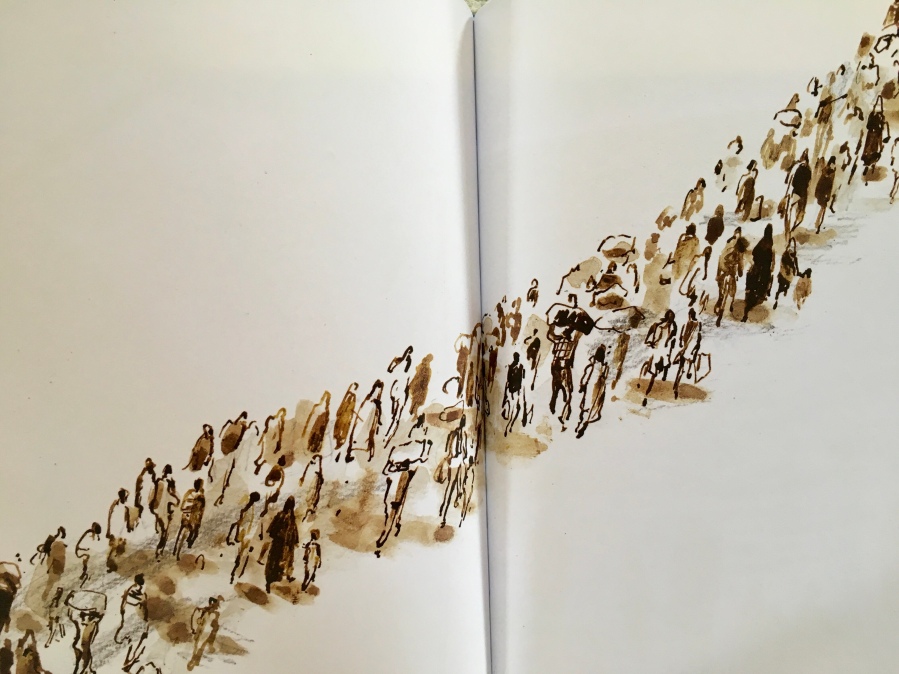 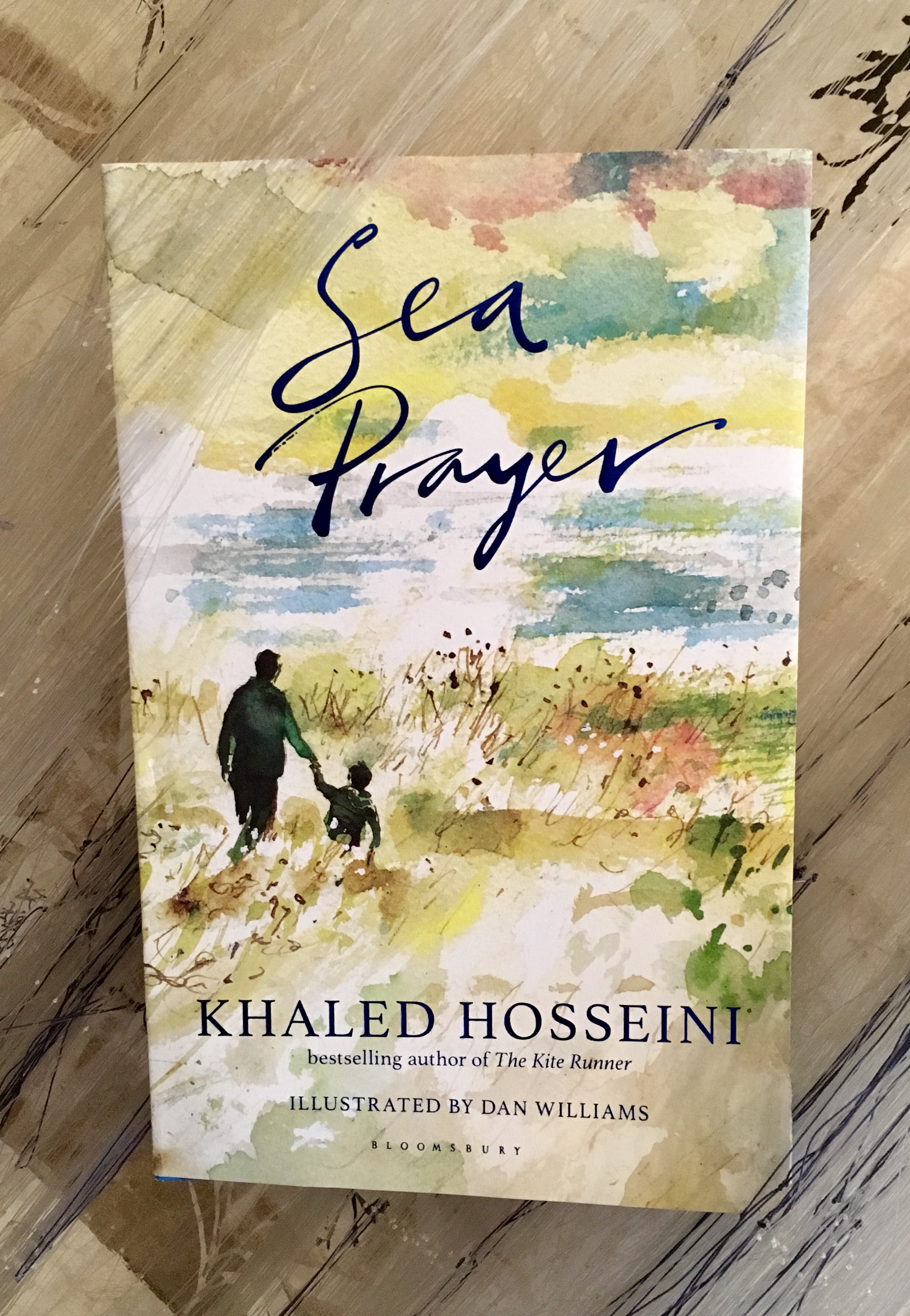 On 2nd September 2015 an image flashed around the world that saddened and horrified us all. A young boy, later identified as Alan Kurdi, lay motionless on a pristine beach in Turkey, the dawn sun glowing around him. He was dead. During his three young years he knew only war in Syria; a war his parents fled to find safety. The photo of Alan touched everyone and inspired, nay, I would say, drove one famous writer to pen a short book, Sea Prayer.

Within Khaled Hosseini’s Sea Prayer the words and illustrations are intrinsically linked, creating a wondrous work of art.

The first page starts as a letter (quasi-eulogy) to the narrator’s son, Marwan, and it recalls the beauty of life in Homs. The father describes his childhood when he had woken “to the stirrings of olive trees in the breeze/to the bleating of your grandmother’s goat”.

Tender, colourful watercolours by Dan Williams accompany the story. On one page the vibrant red of poppies match the red of his wife’s coat, as she holds her son’s hand wandering through a field.

It’s a time of peace, tranquillity, harmony. In the old city there was “a mosque for us Muslims,/a church for our Christian neighbours,/and a grand souk for us all”.

Soon this life of normality is transformed into one “like some long-dissolved rumour”.

As war approaches the watercolours darken, greys, blacks, browns dominate. These are more powerful than ever, conveying the despair and sense of hopelessness. As the illustrations change, so does the language for a few pages, the short staccato sentences echoing the weapons.

Marwan’s childhood is one where he has learned “dark blood is better news/than bright.” His bathing places are not the idyllic creeks of his father’s youth, rather that of bomb craters. This is not a childhood.

As the family join thousands of other refugees fleeing their country I find myself physically pained, the long march pictured across two pages, no words necessary.

Father and son find themselves on a beach with many others where they stand “in the glow of this three-quarter moon”. Here the father makes his promise: “Nothing bad will happen.”

A hollow promise as the father recognises more than ever “How powerless I am to protect you from it.”

The book ends with the beauty of sunlight across a soft morning beach. A new day, a new beginning, new hope.

Three certainties not afforded to all.

This is a book I’ve read many times, each occasion more tear-eyed than before. It is beautiful, heartbreaking, emotional. It is a testament to the human spirit, to love and compassion within every one of us.

Throughout Khaled Hosseini writes with flair and skill, the poetic prose magically drawing the reader into the story. It’s deceptively simple, almost a lullaby in the gentlest of tones telling the cruellest of truths.

If you come to Sea Prayer expecting a lengthy literary novel such as his brilliant The Kite Runner, A Thousand Splendid Suns or And The Mountains Echoed you will probably be disappointed.

If you expect to catch the sublime gifted language and story to remember for all time by this renowned author, you are in for a treat.

This is a book that crosses all genres, it’s for children, for adults, for humanity — it’s a precious gift to hold it within one’s hands and heart. Everyone who reads it will be, as I was, humbled by its message told on behalf of all refugees who endure so much but whose voices are seldom heard.

AVAILABLE: From bookshops, libraries, online such as Amazon UK and Amazon US